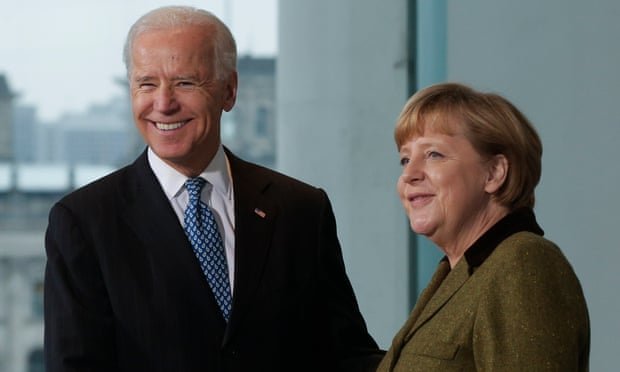 When the long race for the White House ends, another begins: the sprint to be the first European leader to be granted an audience by the new US president. In 2016, Theresa May was distraught to have got a wooden spoon in the competition to put in an early congratulatory telephone call to Trump Tower.

That made her even more neuralgic about beating a path to Washington ahead of her European rivals. Mrs May had to throw in the promise of a Trump state visit to the UK – I rather rudely called it “pimping out the Queen” – to ensure that she got to the White House first.

This desperation can make British prime ministers look pathetically needy, but there is a reason why they set so much store by displays of proximity with the Oval Office. How important a prime minister is to the United States, the planet’s largest economy and most potent military force, sends a message about how much influence the UK wields in the world.

So it is telling that Number 10 is resigned to the prospect that Boris Johnson will not be the first name on Joe Biden’s call sheet if he becomes the 46th president. Nor is there any expectation that Mr Johnson will be first in line when they hand out invitations to the White House. He has already quit a race UK prime ministers are usually pretty good at winning.

“There is an intrinsic problem for Boris,” observes Sir Christopher Meyer, the UK’s ambassador in Washington during the presidencies of Bill Clinton and George W Bush. “The Democrats think Boris is a pea from the same pod as Trump.” Being “Britain’s Trump” goes down almost as poisonously as being Trump himself among many in Team Biden.

They are bracketed together in the minds of Democrats not just because both are rule-breaking populists who have polarised their countries and trashed historic alliances.

Likely members of a Biden administration remember examples of the Tory leader’s insultingly Trumpian behaviour. Ben Rhodes, who was deputy national security adviser when Mr Biden was vice-president to Barack Obama, has remarked: “I’m old enough to remember when Boris Johnson said Obama opposed Brexit because he was Kenyan.”

A more recent inflammatory episode exposed a complete absence of thought in Number 10 about the man whom the polls suggest will be the next US president.

One of the most essential things to know about Mr Biden – it would be on the first page if anyone wrote a book called Biden for Beginners – is that he is a Catholic who is extremely proud of his Irish ancestry. Mr Johnson was either blithe or ignorant about that when he declared that he was ready to break international law by dishonouring clauses concerning Ireland in the withdrawal agreement with the EU.

Mr Biden was one of the voices in the chorus of American condemnation that the Johnson government was jeopardising the Good Friday agreement. “That was profoundly clumsy and stupid,” says Sir Chris. “It immediately ignited the Irish-American lobby in Washington, which is second in power only to the pro-Israeli lobby.”

Mr Johnson can be quite adept at shape-shifting when he thinks it suits his interests. He was a liberal mayor of London before he became the face of the anti-immigrant Brexit campaign. Confronted with a Democrat in the White House, he may try to slough off his Trumpian skin and offer himself as a useful partner for an internationalist president.

For his part, Mr Biden will say that America’s ties with the UK are important to him, if only because that is what all American presidents say. It is nevertheless set to start out as one of the frostiest relationships between Number 10 and the White House since Harold Wilson and Lyndon Johnson in the 1960s.

Though Mr Biden has been a large figure in US politics for decades, one well-placed observer says that Number 10 is “absolutely clueless” about him and his key people. In the past, it has been usual for the Washington embassy to attach a diplomat to the campaigns of presidential candidates, the better to get to know their teams and likely priorities in office. Wary of any suggestion of outside interference in the US election, the Biden team banned meetings with foreign diplomats.

Downing Street has found it hard to find other ways to establish connections. Previous Tory governments had good lines of communication to both parties in the US. This Brexiter-dominated cabinet has cultivated ties solely with Republicans. It was only very recently and very belatedly that Dominic Raab, the foreign secretary, managed to get some time with Biden allies on Capitol Hill.

If they were smarter, the Johnson government would also have paid a lot of attention to Mr Biden’s running mate, Kamala Harris, because she will be a 77-year-old’s heartbeat away from the presidency.

Even if a Biden administration decides to let bygones be bygones, the Johnson government will still struggle to make itself relevant in Washington. After a Trump presidency that has massively strained America’s historic alliances while often fawning to authoritarians, a Biden presidency will try to reassert US leadership of the world’s democracies. A critical feature of that will be detraumatising the transatlantic relationship.

At a recent Ditchley conference of foreign policy experts from America, Britain and elsewhere, one question that preoccupied the gathering was who would become Mr Biden’s “special friend” in Europe. Emmanuel Macron is very eager to secure that status, though others familiar with thinking among the Biden team believe that their highest priority will be re-establishing strong relations with Germany. Almost no one expects the UK to have preferred partnership status.

After the huge distress to European leaders of enduring a US president who willed the breakup of the European Union, a Biden administration will revert to something much closer to America’s traditional post-1945 policy. Namely that US interests are best served by Europe being stable and cohesive. Having severed its central bond with its neighbours, the UK can no longer hope to offer itself to Washington as America’s bridge across the Atlantic.

Searching for areas where the relationship could still be close, some emphasise “the hard security issues” – military co-operation, counter-terrorism and intelligence – where there are mutual interests that have historically transcended the personalities of leaders. “When the Americans are looking for military help, they ask who are our allies and what have they got?” says one senior Tory who thinks this still matters.

But Johnson government officials sound rather desperate when they try to talk up the importance of the UK’s much-reduced military heft. Mr Biden is not planning any wars and, even if he were, the United States can act without the help of Britain.

The biggest foreign policy challenge of the Biden presidency will be managing his country’s tense strategic competition with China while avoiding a deterioration into armed confrontation. Britain’s ability to be of use to Washington in that sphere is limited because our capacity to apply meaningful pressure on China is not high. The UK government has protested in vain about China’s treatment of Hong Kong.

Downing Street also sounds as if it is clutching at very feeble straws when it suggests that there will be an opportunity to win favour next year when Britain hosts the UN climate change conference. Mr Biden is not exactly a summit novice and his team have clocked that Britain was mealymouthed when Mr Trump ripped up American commitments to tackling the climate crisis.

There are compelling reasons why a change at the White House ought to unnerve Mr Johnson. The Trump presidency emboldens populist nationalists around the world by encouraging them to believe that they are part of an irresistibly triumphant global trend. Defeat for him will give his one term in office more the character of a freakish spasm and leave imitators looking like purveyors of an ideological style that is going out of fashion.

During the Trump period, Mr Johnson has tried to lever influence with other leaders by presenting himself as the man who has the ear of, and can help to interpret, the White House wild man. “Boris Johnson sold himself as the Trump whisperer,” says Jonathan Powell, a diplomat in Washington before he became Tony Blair’s chief of staff. “Without Trump, what is the point of Johnson?” More existentially, the British may ask themselves where his policies have left this country other than looking alone in a dangerous world.