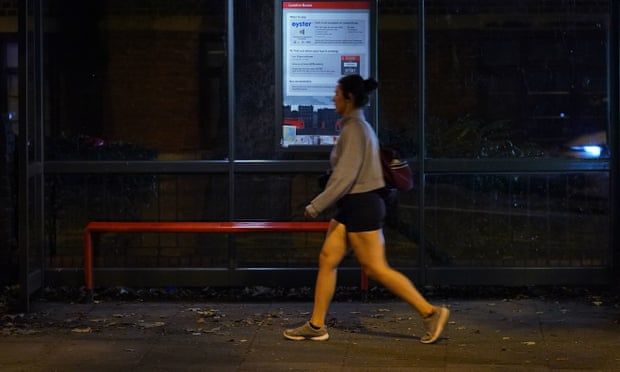 Labour and campaigners have criticised a government-backed proposal for a service to protect women travelling alone as “a sticking plaster solution” that fundamentally misunderstands the problem of violence against women.

The proposal by BT, which has reportedly received backing from the home secretary, would involve people calling or texting 888 to enter an estimated journey time before making a trip. The journey time would then be tracked by the phone’s GPS, with the app sending a message to check whether the user had got home and triggering calls to emergency contacts and to the police if the person failed to respond.

“It feels like quite an old-school solution to ‘text me when you get home’.”

BT is behind the idea for the helpline. Its chief executive, Philip Jansen, told the Daily Mail that he came up with the idea after the coverage of the abduction, rape and murder of Sarah Everard by Wayne Couzens while Couzens was a police officer. According to the same newspaper, Patel described it as “exactly the kind of innovative scheme which would be good to get going as soon as we can”.

Labour’s deputy leader, Angela Rayner, also condemned the idea, tweeting: “Here’s a radical idea for you Priti – instead of tracking women’s movements as we go about our lives, how about the government actually tackles male violence instead? Only 1% of reported rapes result in a charge. That’s the problem, not us walking home.”

The director of the End Violence Against Women Coalition, Andrea Simon, backed the call for work to done on tackling the systemic issue of male violence, describing the phone line as a “sticking plaster solution” that is “symptomatic of an increasingly unequal society … [where] women can’t move around as they want to without taking additional safety measures”.

Simon warned that the phone line could also reinforce victim blaming through the message that “good solutions to the problem of violence against women and girls centre actions they can take to safeguard themselves”. She said that this can then lead to blaming women who do not take those actions.

“Instead of supporting these sticking plaster solutions, the government’s priority should be funding measures that prevent and address harmful male behaviour,” Simon said. “We want to see just as many schemes that actually target behaviour of perpetrators … because so many of these men are known to the police already.”

The former Whitehall troubleshooter Louise Casey has been brought in by Cressida Dick to root out misogyny in the Metropolitan police after the force’s mishandling of the Couzens scandal. Couzens, who was reportedly nicknamed “the rapist”, had previously been investigated for indecent exposure.

Simon cautioned against adopting a “stranger danger frame” in the wake of “horrific, well-documented” attacks on women, when it is “irrefutable” that men who are known to women are “the biggest risks to them”. “We’re moving further away from actually tackling the reality of violence against women and girls,” she said.

A Home Office spokesperson said: “We have received the letter and will respond in due course. As set out in our strategy earlier this year, we need a whole-of-society approach to tackling violence against women and girls, and welcome joint working between the private sector and government.”
Add Comment