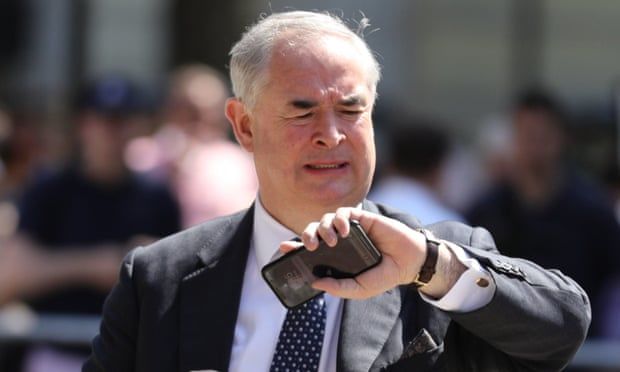 £6m in 16 years: Geoffrey Cox’s outside earnings while sitting as MP

The average full-time worker in the constituency of Torridge and West Devon earns between £521 and £530 a week – the equivalent of up to £27,560 a year. For the local MP, Geoffrey Cox, who has represented the area since 2005, that is pocket change.

Guardian analysis of the MPs’ register of interests found the former attorney general has earned nearly £6m from his work as a barrister outside parliament since becoming a Conservative MP.

He reported additional earnings for his second job of £930,588 in 2021 so far, including a retainer with corporate law firm Withers worth £400,000 a year, requiring him to work 10 hours a week outside parliament. 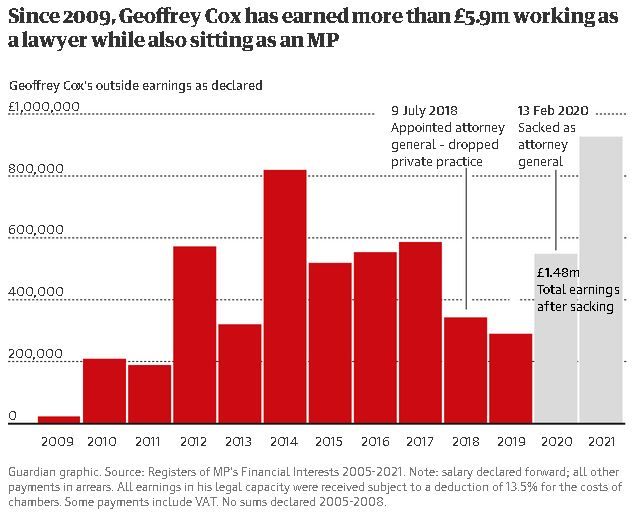 Clients represented by Cox have included a Sun journalist acquitted of bribing public officials for stories and clients in various Caribbean offshore jurisdictions, which have repeatedly been accused of a lack transparency.

At one point, in spring 2018, Cox spoke out unsuccessfully in the Commons against forcing the Cayman Islands to implement enhanced disclosure requirements, arguing the extra transparency would force money to “go to where it is darkest”.

More recently he has been advising the government of the British Virgin Islands, another British overseas territory, in a public inquiry into corruption. Effectively his principal client is Andrew Fahie, the BVI premier, who is defending himself and his government from allegations of misgovernance.

The total disclosed to the MPs’ register by Cox down the years is £5.92m but the true figure is likely to be far higher as tighter disclosure rules were brought in a little over a decade ago, and significant sums are only reported from 2010.

Before 2009, Cox only declares that he has made money from “practice at the bar” without disclosing the sums involved.

A statement released on behalf of the Conservative MP said on Wednesday that he was “a leading barrister in England” and made “no secret of his professional activities”.

It added that it was “Sir Geoffrey’s view” that it was “up to the electors of Torridge and West Devon whether or not they vote for someone who is a senior and distinguished professional in his field and who still practises that profession”. At the last general election his majority was 24,992.

Cox has regularly topped the list of MPs earning the most outside parliament, a list that also briefly featured Boris Johnson, when he was paid £275,000 by the Daily Telegraph for a weekly column, and only halted during the period he acted as attorney general.

Appointed by Theresa May in July 2018, he served as the government’s chief law officer and was briefly considered a rising star, after stealing the show introducing the then prime minister at party conference in October that year.

But he was sacked in February 2020 by Boris Johnson – forcing him to rapidly rebuild his legal portfolio, earning £1.48m since then.