A “shocking” 50,000 Ukrainian refugees in the UK could be made homeless next year, the government has been warned, but ministers are refusing to offer a fresh package of support to offset the impending crisis.

As the cost of living crisis bites and with no end in sight to the war with Russia, fears are mounting that the government’s Homes for Ukraine scheme will unravel next month when refugees’ initial six-month placements with hosts end without alternative accommodation in place.

Although Boris Johnson has framed the UK’s response to Russia’s invasion as a principled triumph, a number of organisations warn that a key response of his government to the conflict’s refugee crisis could prompt a “disastrous rise in homelessness”.

A total of 83,900 refugees have arrived under the Homes for Ukraine scheme since it began in March. Refugees were matched with sponsors who agreed to house them for six months and were paid £350 a month.

Not all matches have been successful. Government data reveals that since the war began in February, 1,335 Ukrainian households – including 945 families with children – have registered as homeless.

That figure is set to soar from next month. Analysis by children’s charity Barnardo’s, Labour and the Liberal Democrats say that, based on feedback from refugee sponsors, between 15,000 and 21,000 Ukrainians could be homeless by the winter, rising to more than 50,000 by the middle of next year.

One group, Refugees at Home, said the figure could be even higher because of a combination of pressures, including energy bills, soaring inflation and climbing interest rates.

Shadow levelling up secretary Lisa Nandy said: “These shocking numbers reveal the scale of the crisis about to hit refugee families who came to Britain under the Homes for Ukraine scheme, fleeing Putin’s war.”

When levelling up secretary Michael Gove unveiled the scheme in March, Nandy asked in parliament what plans were in place for when sponsorships broke down, but she did not receive an answer. When the government was asked by the Observer on Saturday for the projected rates of homelessness among Ukrainian refugees, it declined to offer a figure.

James Jamieson, chairman of the Local Government Association, which represents more than 330 councils in England, warned that even if Ukrainians could find a new host in the event the original sponsorship did not work out, grave issues lay ahead.

“There is a significant risk that – even if rematching is available – many Ukrainian families may need to present as homeless because of a lack of sponsors or other options,” he said.

Last week, refugees minister Lord Harrington said monthly payments to UK hosts should double after six months to £700 a month to offset cost of living concerns. But Harrington has no authority to implement the rise, and so far the Treasury has refused. The government is now asking existing hosts to allow Ukrainians to stay for longer than six months, and is appealing for new sponsors.

For many, the six-month period will expire in mid-September, with a significant proportion of hosts saying that without extra government help they will have to pull out. Several are warning that attracting new hosts will be considerably harder.

Stanislav Beneš of charity Opora, which has helped about 8,000 Ukrainians into the UK, said: “The initial wave of sponsors included people who did not quite understand the implications and consequences of this sort of responsibility.”

Although the government said on Saturday that it was “reviewing” the level of support for the scheme, no fresh or improved help is yet on offer.

London mayor Sadiq Khan said: “It’s vital that the government steps forward to offer more support. Ukrainian families have come to our country seeking help and stability and the government needs to act now to ensure that hosts have the financial assistance and support in place to enable them to continue, and prevent a disastrous rise in homelessness.”

Kitty Hamilton of Vigil for Visas said increased support should be offered for three years – the length of visas given to Ukrainian refugees.

“The government’s commitment was for three years, not six months, so there needs to be a longer-term gameplan that doesn’t squander the goodwill of so many. The scheme was offered for an initial six months – the implication was to give the government a chance to make more substantial plans and for the invasion to end. But nothing has happened.”

Hamilton belongs to a group of sponsors in Crouch End, London, which manages 400 hosts and is so concerned at the number who might walk away from the scheme after six months that it is meeting with its local MP this week to discuss the issue.

Nandy added: “British households across the country have stepped up, while their government has gone into hiding. No more delays, no more sticking plasters – we need a proper plan to house and support refugees.”

Robina Qureshi, chief executive of Positive Action in Housing, said she was worried about “impending homelessness on a mass scale” when the first six-month period ends.

A government spokesperson said: “Councils have a duty to ensure families are not left without a roof over their head. We’ve provided them with £10,500 per person to cover costs, with access to a rematching service to find a new sponsor in the rare case of a sponsorship breakdown. We have already acted to make sure the £350 thank-you payments are exempt from tax, and continue to monitor and review the support provided.”

They added that they were working closely with councils to ensure Ukrainians have access to suitable housing if they decide to move on. 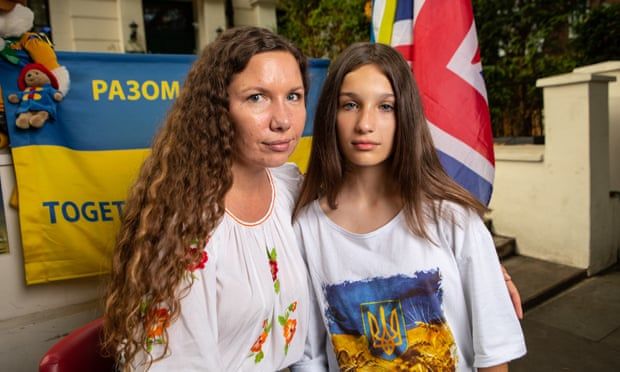 Olha Plyushch and daughter Sandra are in danger of losing their home because their British sponsor is moving house.

Olha Plyushch, 36, a refugee from Kyiv who works for the Ukrainian Institute in London and for the Opora charity, where she helps advise Ukrainians arriving in the UK, said the renting process is a vicious cycle for refugees because they cannot pay big deposits and do not have a UK job history or a willing guarantor.

She knows of people who are already homeless and sleeping on friends’ sofas because their accommodation has fallen through. In some rare cases, she said, members of the British Ukrainian diaspora who can afford the outlay are helping out by renting entire houses and letting rooms to refugees.

“I know there are Ukrainians who have money to pay rent on a monthly basis, but they are being asked to pay between six and 12 months’ rent in advance. That is a lot of money, so not many Ukrainians can afford it.

“They do have jobs, so they do have money to pay on a monthly basis but, in advance, a 12-month payment is too much.

“It’s a very uncertain situation because September and October is actually when these six-month sponsorships come to an end. But honestly, I can speak for myself and for many Ukrainians, when we made the decision to come here, we were planning to go back to Ukraine within the six months because we all believed the war would be over.

“But it’s not, and a lot of families find themselves really confused right now because it didn’t go the way we planned.”

Plyushch herself is in a housing dilemma because her sponsor is moving out of London. Her 12-year-old daughter has a place at a school in Sidcup, but she has been unable to secure a school place in Tunbridge Wells, the town her host is moving to.

I can’t be angry. I haven’t any energy for that. I only try to be alive’ 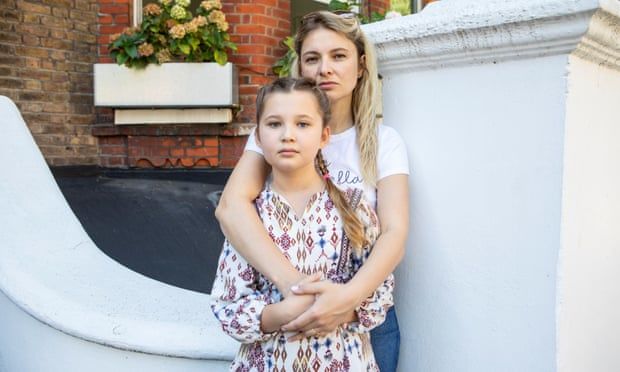 Olha Apriamova and her daughter Alina, refugees from Kyiv.

When Olha Apriamova and her nine-year-old daughter Alina’s Homes for Ukraine sponsorship fell apart by text message after less than a month in July, they didn’t know what to do.

Apriamova, 34, whose husband died in the war in June, wrote to friends and was offered temporary shelter in their two-bedroom flat, where the five of them are now living.

But finding something permanent is proving impossible. At every flat viewing, landlords tell her that they will not rent to refugees.

Meanwhile, in order to work in her profession – as a plastic surgeon – in the UK, she has to go through numerous processes and exams.

And Alina, whose mental health is suffering after their experiences under rocket attack in Kyiv, has not been to school since 23 February because they cannot find a place. Until recently, she couldn’t be left alone, not even to go to the bathroom, and has had little interaction with other children.

Now Apriamova, who wants to stay in London, is exhausted and unsure what to do next. “I cannot be mad, I cannot be angry, because I haven’t any energy for this,” she said. “I only try to be alive, be safe.”

She added: “I can’t go back to Ukraine. I don’t know what I have, memories and that’s all. Everything is crushed – your life, family, work ... All the time, everyday, a few times a day, we heard a rocket signal. Can you imagine?”