A plumber could not believe his eyes when he cut a hole in floorboards in an Edinburgh house and found a bottle containing a 135-year-old message.

Peter Allan, 50, discovered the Victorian time capsule when he opened up the floor in the exact spot where the whisky bottle had been left.

He rushed downstairs to tell the owner of the house in the Morningside area.

Eilidh Stimpson had to smash open the bottle to read the note - and said her two children were excited by the find.

Mr Allan told BBC Scotland he could not quite believe his luck in cutting into the floor directly above the bottle.

"The room is 10ft by 15ft and I have cut exactly around the bottle without knowing it was there. I can't quite believe it," he said.

"I was moving a radiator and cut a random hole to find pipework and there it was, I don't know what happened.

"I took it to the woman downstairs and said 'Look what I've found under your floor'." 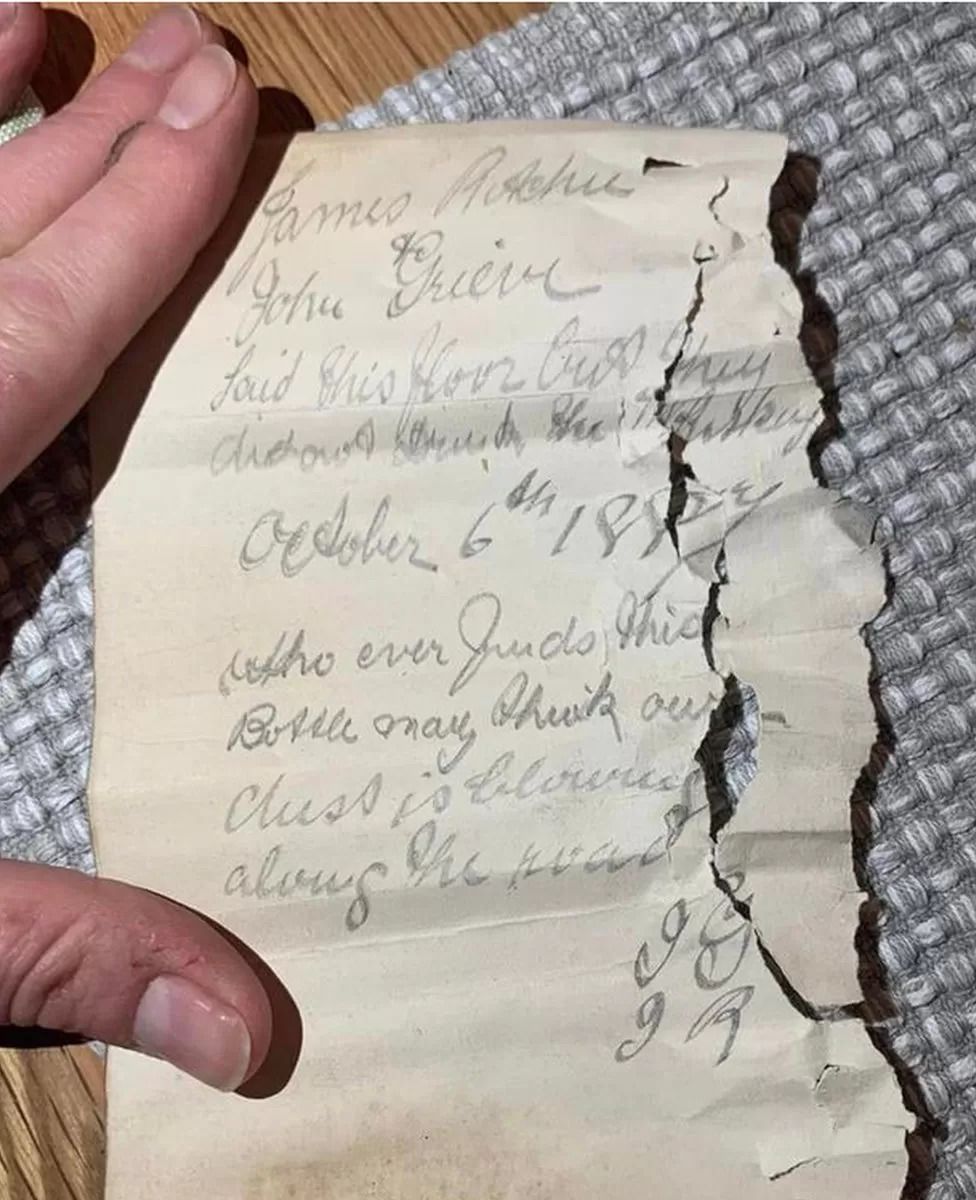 The note is signed and dated by two male workers who laid the floor
Mr Allan, owner of WF Wightman Plumbing, said it was discovered under what would have been a maid's room when the house was first built.

Now mother-of-two Eilidh Stimpson, an Edinburgh GP, lives there with her husband.

She decided to wait until her children aged eight and 10 got home from school before they attempted to retrieve the note from the bottle.

She told BBC Scotland: "When I picked them up I told them I had something really exciting to tell them and they said 'Is it that we are having hot dogs for tea?'

"They had a few more guesses and then I told them a message in a bottle had been found in our house and they were really excited and thought it was maybe treasure."

When they got home they desperately tried to get the note out with tweezers and pliers, but it started to rip a little bit.

So she got a hammer and smashed the bottle.

She said: "We were all crowding around and pointing torches at it and trying to read it, it was so exciting."

The note was signed and dated by two male workers and read: "James Ritchie and John Grieve laid this floor, but they did not drink the whisky. October 6th 1887.

"Who ever finds this bottle may think our dust is blowing along the road."

She said: "I feel absolutely terrible breaking a 135-year-old bottle but it was the only way to reach the note. I've kept all the pieces in a Tupperware tub."

Since the find on Monday a family friend looked on the 1881 census and found the men's names living just a few miles away in the Newington area of Edinburgh.

A curator at the National Library of Scotland has since recommended to the family that they preserve the note in an acid-free pocket.

Eilidh said: "I've ordered some pockets and think ultimately we will frame the note with a piece of the bottle such as the neck because it's such an exciting and lovely thing to have."

She said they would put a bottle, with a new note from the family along with a transcription of the note, back into the hole before it is covered over.

"To think it lay there all that time and could have been there forever is just amazing. It's not from just the 70s or something like that, it's so much older, it's very cool."